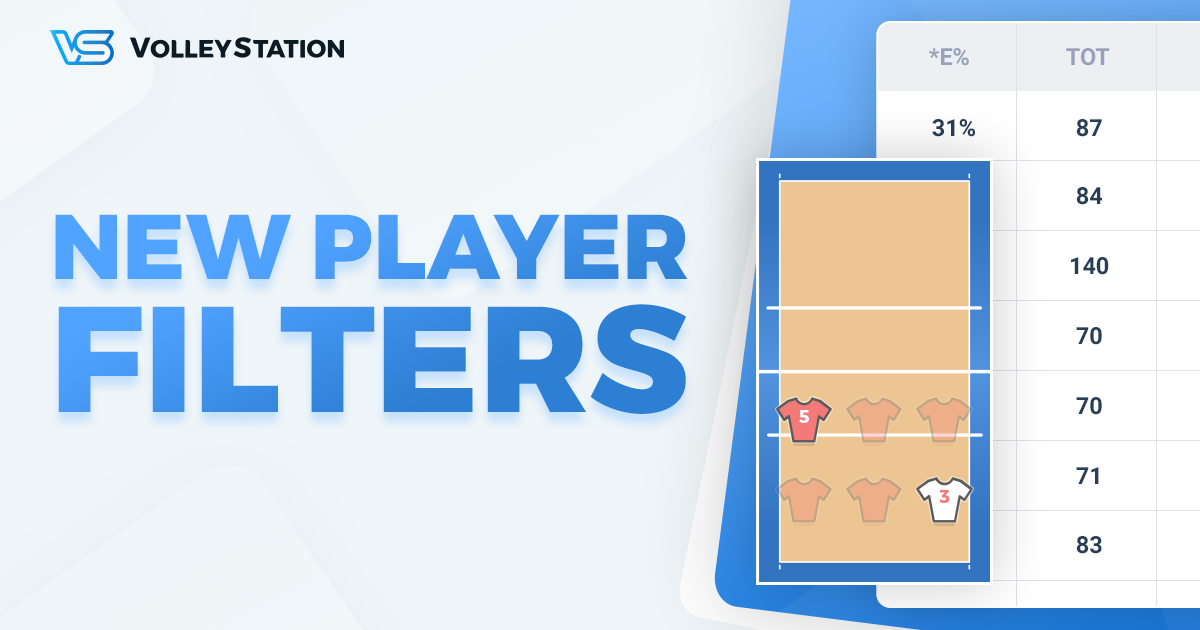 With today’s release, we are expanding our filtering capabilities related to different attributes of players on the court. We are changing the way player order works, as well as adding some completely new filters.

This is a new filter that allows you to filter plays by player position, rather then by play start zone. Here is an example of it

This code will give you all attacks of player 11 from home team, when that player was in front row. Please note that this filter is used without team symbol, as it always refers to player performing the play.

Player in zone can be also used in more complex use cases like this one:

Here we calculate dig efficiency for home player 8, when away player 11 was attacking and was front row.

As you can see, this filter is simple, but allows for some neat queries when combined with all the other tools we already have

This new filter allows for filtering plays by the jersey numer of setter currently on court. Here is a basic example:

The result of this query, will be all home attacks when home setter was player 21.

You can also use this filter for an opposite team.

This is home dig efficiency, when away setter was player number 7.

You can also combine this filter with VSPLAYER to make it dynamic.

Here we see the same code as before, but bound to opponents first setter, rather then hardcoded number

Player order filter already exists in VolleyStation, but in this update we alter it’s behaviour, to make it more useful.

Currently, if you filter player order like in example below, you will get all plays where players 3 and 8 were and court, with one player between them.

This may get you plays where 3 was in zone 1, and 8 was in zone 3. It may also give you those same players in zones 4 and 6. This behaviour, while logical, was not really fit for writing volleyball queries, where most of the time we look at things in reference to position of the setter.

That’s why we decided to introduce the following changes to this filter:

Those changes were also applied to player order filter when creating classic reports, as you can see below

Let’s now see how this filter can be used, by analysing the following example.

This example will give us the efficiency of all our attacks, when away player 7 was two zones ahead of setter and away team setter was in zones 6, 1 or 2. While this second part may seem particularly complicated, what it actually means is that 7 was in front row.

This is quite similar to what we did with PZ filter, but it allows you to filter by position of player not performing the play. We hope that this somewhat advanced functionality will be of use to our most inquisitive users.

Give it a try

Changes mentioned in this article, are already available to all VolleyStation Pro users. Just make sure, you are using VS Pro in version 1.14.2 or above. If you want to try VS Pro, then please contact us using the link below.